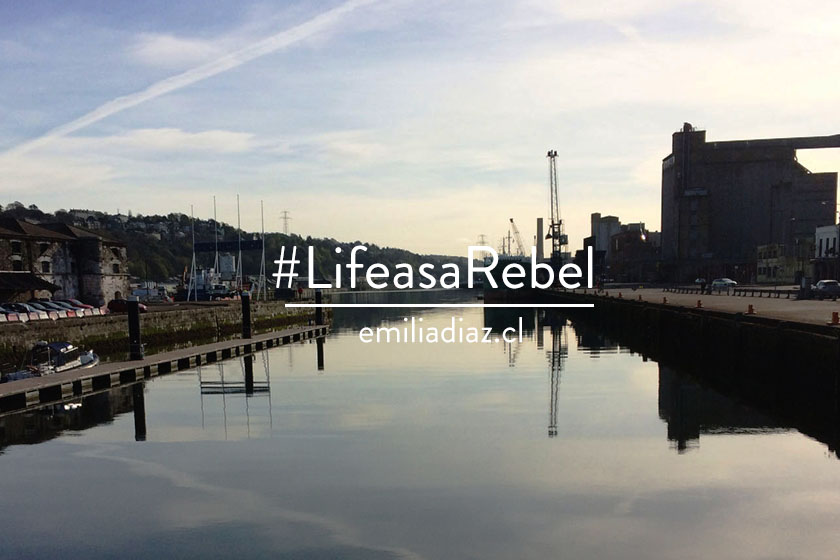 When the Rebel Bio program starts, I’m stuck in a Starbucks at Toronto Pearson cursing my poor planning and subsequent 15-hour layover in the weird limbo situated between check-in and international police. I take the time to do some of that really fun work one always looks up to, like organizing all my laboratory files and trying to make sense of random documents saved with increasingly cryptic filenames. Later I find out Monday was mainly orientation, and that I didn’t miss out on much except for Bill Liao’s take on a pep talk, that apparently included the phrase “welcome to hell” and at least one evil chuckle in it.

I finally get to Ireland and later to Cork on Tuesday afternoon, having missed yet another day of the program. It takes me a while to get settled down in the apartment that will be home for at least a month, an overpriced one-bedroom third floor with a steeply inclined roof that threatens to knock me out sooner than later. And yet, after two days of plane travel, it feels like a freaking mansion. I fall asleep impatient for the third day — or rather, my first.

Next morning I hit my head in the low ceiling. Twice.

The day gets better from there: I get to the Rebel offices, housed in Revolution Space by Penrose Wharf, and am greeted by a warm, wide space full of tables, oversized cushions and a quiet group of what I assume to be my new classmates for lack of a better word. Introductions begin shyly and carefully, and it’s a breath of fresh air from the generally brash approach of hustler-founders I tend to find a bit abrasive too early in the morning. I get my first one-on-one with John, Rebel’s CSO, where I struggle to put in words years of work, a modest amount of success and an ever-growing list of questions. Hopefully by the end of the program I will have increased the former and slightly reduced the latter.

We later go to the UCC campus to check out our laboratory for May. We had been told in advance it was a teaching lab, but I didn’t think teaching labs would look the same across the globe. I could smell the Micro 101 student tears. I’m guessing some of us got war flashbacks.

The campus itself though, that was beautiful. Old, well preserved brick buildings with soaring gothic arches that the students respected but treated like a fixture of their learning experience and not a living, breathing piece of history. I like it when old structures get new functions. No point in gathering dust inside an old barred church when you can hold student assemblies inside of it.

Later that night, a team got themselves locked inside the office. That’s how you know the adventure begins.

On Thursday, we pitched for Bill and the rest of Rebel. He just sat there with his hands in front of his face, looking anywhere from mildly amused to mildly judgmental — a truly impressive display of poker face. Some of us struggled, but nobody gets fear paralysis so I’d count that as a win. It’s great to finally see what everybody is up to, since here you don’t just need to associate a name and a face, but a company and product as well. Projects are varied, spanning health, food, environment, as well as many countries, industries and motivations. It’s a bit overwhelming, and I retained maybe two. I must work on my memory.

Bobby Voicu gives us a talk on Friday. As one of the founders of MavenHunt, he has quite a story to tell and gives us a great recount of his ups and downs and the best advice he could extract from all of them. Though he’s from a different industry (online gaming and biotech will combine one day though, mark my words) his words resonate with us, and he does us the great favor of humanizing what is generally shown as a high soaring success story. “If you asked me to found a company now,” he said halfway through his presentation, “I’d probably go stand on the corner and cry.” That’s when I knew I could trust him.

We finish the week at the Sextant, a bar two blocks away from the office and my first experience in an Irish beer garden. Earlier that day there had been some friendly mockery regarding the small group of latinos that was already forming and how loud we tend to be. But let me tell you: give an Irishman a beer and say goodbye to your ears.

As far as first weeks go, it was pleasantly relaxed. And yet, Bill gently reminds us that “this is your last relaxed week ever, it gets exponentially difficult from now on. Get some rest, welcome to hell”.

To be honest, I’m looking forward to it.