I first met Andreas as a jury member at the Rebel Bio Pitch day back in Spring of 2017 when he was heading the Life Science team at M Ventures. A lot has happened since then, so our Skype session turns into an impromptu catch up game for a while, sharing startup experiences and talking about what’s new since the last time we talked, but now that questions begin, he’s all business.

“Maybe I should begin with who I am? Usually where you come from explains a lot where you’re at today. So, long story short, I’m a scientist by training but I’ve worked in and with startups for the last 13 years already. I was part of startups as a scientist, as a business developer, went through an M&A in one of them, so I think I’ve seen the monkey circus from all different sides – including, and mostly, being the monkey.”

Andreas clearly can’t be considered a monkey in this show anymore – he has been exposed to a variety of roles in a whole different category. Most recently, as the Investment Director for the Life Science area at Merck Ventures (M Ventures) he built the team investing into novel modalities, tools and platform, as part of a €300 million fund that looks for early stage startups at a global scale, and has already produced interesting exits in protein engineering and cancer treatments, among others. Still, having worked as a business developer and having gone through a successful exit himself, it’s safe to say he’s been through the whole life cycle of a startup, and is now coming out of the other side.

“I truly believe that it helps, when you’re on the financing side, to know the pain, how it truly feels like when money runs out, or what pitching feels like.” He remarks. “Knowing how important it is to get clear feedback. Not just an oh, it’s super interesting but out of our scope or other intangible feedback, but really tell people when you don’t understand the idea or when it’s really a case of it’s not you but us.”

“I started with traditional venture at Redalpine in Switzerland and more recently was active in corporate ventures with a global mandate at M Ventures – it is interesting to compare both” Andreas tells me about his work in investment. “My first job in VC was with Redalpine, at that time a more local, early-stage player in Switzerland and central Europe with a smaller team and a classical VC partnership structure. After my PhD with a startup I entered VC as an Intern/Analyst and over time got exposed to more responsibilities and all aspects of VC. I consider myself lucky that I could start in VC with a smaller team, exposed to all responsibilities – from fundraising to building an investment strategy, the investment process and portfolio management. Corporate VC (CVC), on the other hand, works with a variety of models: some funds are very close to their parent organization and even share resources with BD and combine equity investments with special rights or even license deals. Other CVCs operate like a traditional fund, pure equity and ROI driven, with somewhat close ties with the overall strategy and R&D within the parent organization.

I have worked in the latter mode at M Ventures, which means strategic but ROI-driven. The only difference with a traditional fund would be that we always asked the question Would this investment serve as a catalyst to bring a technology or company to readiness that could become interesting for our parent organization? So that’s what I did with M Ventures: a return-driven catalyst.”

It might sound a bit arid, but then he gives this a very interesting turn: “We ask: If this company works out, would they be changing the landscape of our business? Would we be interested in working with them sometime in the future? If the answer was yes, then we operated like any other venture fund.”

Quite a straightforward application of the Disrupt Yourself Before Someone Else Does Principle, if you ask me.

“So why do I like VC? Because I’m excited by good technologies with relevant applications.” Andreas pauses and then rushes to clarify. “And I think that if we talk about venture and innovation in biotech and synthetic biology, this is something that has to be clear: venture capital is a return-driven financial instrument and not a grant agency. When you talk to a venture firm you need to have a tangible business case, world-changing or not. Maybe you have a ground-shaking idea or technology that could do many different things, but it needs to make economic sense at least in one application, in one market.”

“Let’s say there’s biotech and life sciences. Biotech is classically therapeutics – anything with a clinical development path and market. Although I did a lot of drug development myself, starting with my PhD, I spent most of my VC activities investing into fundamental technologies and platforms that very often don’t yet have a defined target or indication. In classical healthcare investments it’s very important that the target is clear, that there’s a robust mode of action ideally with a validated model system and many other factors. So at least in the beginning you need some sort of picture of that, even if we know you can’t really answer all those questions yet because the development takes 10 years for you to know if the clinical trial works – But it needs to be relevant to begin with.

“The same is true in the non-drug world of life sciences – e.g. analytical technologies or novel tools, where you don’t have this long development curve before seeing some form of value creation. You must know what’s the core value proposition that you have. Who will pay for it, and why. Can that person actually pay for this? What’s the environment like? And the difference between biotech and life sciences in this division is that in the latter you can have some sort of revenue along the process, which you usually don’t have with therapeutics. With a drug, you only make revenues when it reaches the market, and usually you want to exit the company before.” 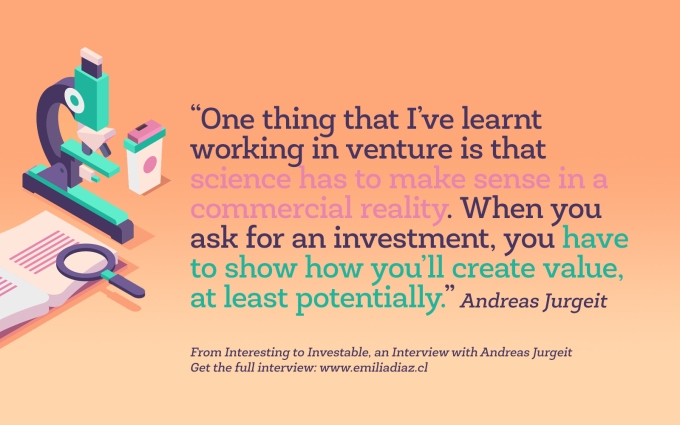 Synthetic biology, though, seems to be stuck in the Interesting Technology box in way too many pitches and R&D proposals. And to someone like Andreas, with his background in pharma and traditional investment, this becomes apparent right away.

“In life sciences we talk about a much more traditional business.” He mentions. “Much more tangible factors. So coming back into synthetic biology, what happens to me now is that I can be excited by a technology, but it’s not yet investable.  One thing that I’ve learnt working in venture is that science has to make sense in a commercial reality. When you ask for an investment, you have to show how you’ll create value, at least potentially.”

It seems obvious to a business mind, but a life in the lab often doesn’t instill that way of thinking in you. Still, you could be pressed to ask – is this just about money, then? If money is what opens and closes research lines and labs and development units, how is something like life sciences investment shaping science discovery? Do you need to choose between profitability and social impact?

“The nice thing about venture is you can do both: You can make money and you can change the world for better. That’s something that drives us, a purpose beyond financial return, knowing you can make people’s lives better. Knowing you can enable research that wasn’t possible before. It’s what drives you at the end of the day – Making a good deal is fun, but it doesn’t hold you for those 5 or 7 years before the exit.”

That’s good news: As long as it makes sense commercially and serves a greater purpose, you can move from interesting to investable. But what about the technical side of things? What about Synthetic biology, specifically?

“When I think about synthetic biology,” Andreas tells me, “what I find particularly exciting is that Nature knows how to do most things pretty well, and we can learn a lot from Nature, and so we get topics like industrial biotech and using organisms to make complex products. But it’s quite interesting to go a step further: Nature can grow whole infrastructures, like a rainforest, without the need for big machines or any of that – What can we learn from this at a conceptual level? But that’s not a tangible investment, so this is exactly what drifts into something interesting, but not yet an investment.

So here comes another very key question that we ask: What do you need to get there? To the actual therapy, the final application of your tech. And that’s a very interesting thing to do, because you’re no longer just scratching the surface of the tech, but going a bit deeper.” 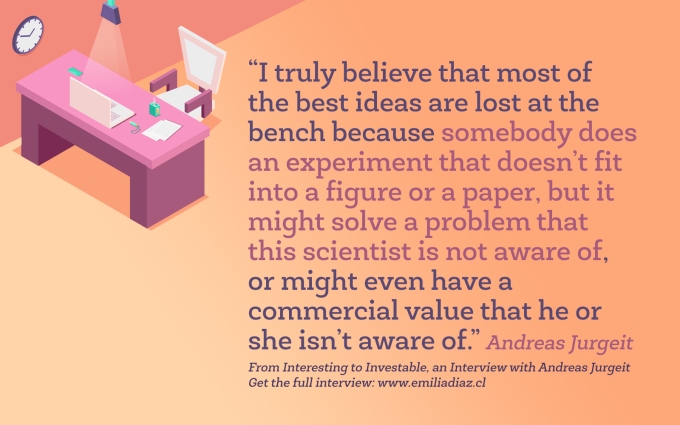 When going broader on the topic of developing impactful science, Andreas focuses on one of our biggest divides in Science: Industry versus Academia, and how that divide might be the most pressing chasm to bridge to move forward.

“I truly believe that most of the best ideas are lost at the bench because somebody does an experiment that doesn’t fit into a figure or a paper, but it might solve a problem that this scientist is not aware of, or might even have a commercial value that he or she isn’t aware of.

I am convinced that one of the most important things that we can do as a society is finance education and in particular basic research without immediate market-focused goals, because if you put this corset of transferability and business cases on basic research, then you wouldn’t have most of the things that brought us forward.

But, every basic researcher should at least think whether their research could have commercial value for society. Because if you don’t patent, nobody will finance it. And if nobody puts money in it, the best idea might be stuck in a paper and will never make it to a product. Because it is naïve to think that a good idea will always resurface by itself – that’s not how it works.

We should not have walls between Industry and Academia, because it’s actually much closer than people are sometimes aware of. And it only takes small, catalytic steps to get there and bridge that gap. Simple things: talk to your tech transfer office before you go off to that conference to talk about your interesting finding. Think about it in the broader sense. Talk to people that are outside of your research area about your research. Make research accessible. It should be much more important than it is now for a researcher to think about the practical impact of what they do, and I don’t mean this in the classic “this will lead to a cancer cure down the road” way. I mean that researchers should be aware of their responsibility towards society to also at least consider veering their research into a commercial, viable path.”

Could this be useful for somebody? That’s the question that Andreas wishes researchers were taught to ask themselves. Because it’s not about money or the industry’s sometimes competing interest – it’s because, as Andreas says, “nobody wins if we don’t progress or even cure a disease.” So should we continue funding not-yet investable science, like most of synthetic biology can be categorized now? Yes, of course. But we can’t let the hype convince us to stay on the surface. We need to bring it down to the practical, the applicable, the standardized, not just to make our niche become economically sustainable, but to leverage the tools it can bring to make the world better. We are currently at a tipping point in the curve, in the initial “everyone’s excited stage,” and now is when according to Andreas, “we realize it was not that simple, and then the work starts.”